It's an exciting day at Marsh Towers - the proofreading copy for my new novel, Once Bitten, is here! 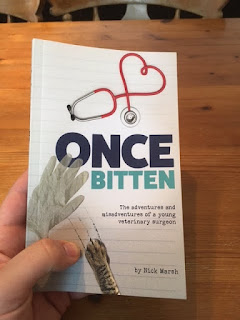 I am very pleased with the cover design (courtesy of Jim McNulty of JMC Design and Motion Ltd), and it's been far too long since I had a book out. Release is imminent (within a week) and so in celebration, and as it's hard to share champagne on the internet, here's a sneak preview of the prologue. I hope you enjoy!

When I was a child, my parents were intense holidaymakers. Not for them package flights to the Algarve or the Costa del Sol; no, they didn’t feel a holiday was worthwhile unless it involved a tremendous amount of planning and work. They would spend months scrutinising maps of northern Europe, patiently plotting points, measuring distances and noting places of interest and fuel way-stations. Entering our kitchen in the weeks leading up to a summer holiday was like walking into Fighter Command during the Battle of Britain.
My parents were both teachers, and they were determined to make the best of our long summer holidays, which meant that the trips usually lasted three and sometimes four weeks – an eternity when I was ten. Large sections of my childhood holiday memories consist of the image of the back of my dad’s seat rest in our old Nissan Bluebird, which I watched while I wondered how much farther we had to go to reach the next marked spot on my parents' much pored-over map.
The monotony of these long trips was occasionally leavened by my parents pulling into a lay-by beside the autobahn and swearing over that map whilst my nan, my brother and I quietly drank orange juice from pre-packed cartons[1]. These diversions were the exception rather than the rule, though, and for the rest of the time it was good to have something to occupy my mind - something to read. Therefore, my personal preparations for these epic holidays involved meticulously choosing which books I was going to take for the journey.
I must have been at a particularly impressionable age during the holiday that stands out in my mind because I packed two books that had such an impact upon me that they affected the
entire future trajectory of my life.
The first book was called Deathwing over Veynaa, by Douglas Hill, and it was about an indestructible alien mercenary from the planet Moros.
The second was Every Living Thing, by James Herriot.
When I’d finished them, I knew that was it for me. I knew exactly what I wanted to do with the rest of my time on Earth.
Unfortunately, I soon discovered that it’s incredibly difficult to actually become an indestructible alien mercenary, so I settled on trying to become a vet instead.

The Legionnaires of Moros were mercenaries, but they were ethical - they never joined a fight that wasn't morally right, and they never did it just for the money. Their quest was to make the galaxy a better place, one job at a time. Back on my Earth, there were a disappointing lack of alien battalions to fight, but I felt I could still serve my galaxy with honour. If James Herriot had made me want to be a veterinary surgeon, the Legions of Moros had made me want to do it right. Which is why, fifteen years later, when I stood in a marquee in a field at the Langford Veterinary School in Bristol University, dressed in black robes and reciting the oath of the veterinary surgeon, every word of it came straight from my soul:
‘I promise above all that I will pursue the work of my profession with uprightness of conduct, and that my constant endeavor will be to ensure the welfare of the animals committed to my care.’
In that marquee at Langford, I stood up to speak the words as an apprentice, but I sat down as a legionnaire. The oath was my own Quest. I was going to make the galaxy better, one animal at a time.
Like many brave heroes, those around me sometimes doubted me. Was I sure? they asked. Was I cut out for it? I wasn't the world's most outgoing person - I was shy and nerdy. It was a hard job. Wasn't I more suited for a job in administration, or I.T., or academia? I remember one melancholy trip to the pub with an old school friend who kept saying, 'Two years, mate. I give it two years before you're worn down, and you quit.'
This is the story of those two years. It's the story of the oath, and my quest, and the journey that it took me on.

[1] I know they meant well, but the taste of warm cardboardy orange juice slurped down in autobahn lay-bys was enough to put me off drinking it for fifteen years.