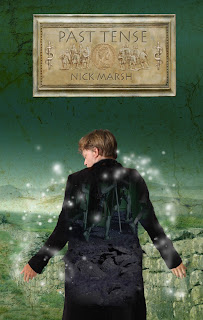 The second novel in the Conduit sequence, and the sequel to Soul Purpose.

Last year, Alan Reece, an unassuming animal doctor from the West Country, was surprised to discover that he had become the 'Conduit', a link between reality and the strange world beyond. Not even beginning to understand this, Alan deals with this problem as he deals with most in his life - he ignores it. Unfortunately, ripples from his unwitting transformation have freed a dark and terrible creature from its improbable prison.

Burrowing into the past, it plots revenge from Ancient Britain, and only Earth's reluctant Conduit has any chance of stopping it.

Now Alan and his friends - a medium-turned-physicist, and a self-confessed 'bum' - are wishing that they paid a little more attention during Roman history lessons at school, and Alan is realising that if he doesn't face up to his unwanted legacy soon, it could be the end for all of them.

Past Tense is available as an eBook from amazon.co.uk and amazon.com

'As Lovecraft once famously noted: "The world is indeed comic, but the joke is on mankind." Readers of this engaging and well-wrought novel will certainly find themselves nodding in affirmation.' Bookpleasures.com

'I was suitably impressed, actually blown away would be more accurate, with the first novel and the skill which Marsh displayed is, if anything, sharper in Past Tense as the story effortlessly flows, thematically, between horror, fear, humour and laughter. Hopefully someone will pick this us; it would make a stunning television series somewhere between Doctor Who and Being Human' SciFi Online

'...Marsh deftly channels the ghosts of Douglas Adams and (to a lesser extent) Philip K Dick to deliver a mind-bending tale of tunics and time travel...Marsh proves himself to be a talented and invetinve purveyor of imaginative fiction' Small Press Reviews (includes a review by robot!)

'I hope that with Past Tense Nick Marsh is exposed to a wider audience because he has a voice all of his own. It may be a whisper at the moment but it could grow into a roar' Fantasy Book Review