The Fly Strikes Back

The smell is always a clue; wet fur mixed with urine and a hint of corruption. It's not too strong, but I've smelled it often enough that by the time I'd lifted the rabbit out of the box I had a fair idea what was going on even before his owner had told me what was wrong.

He's not eating, I was told. Depressed, not moving around much. Could he have caught a chill? I started to shake my head and look down towards the tail area, and that's when the first maggot landed on the table and confirmed to me that fly strike was back in season for another year.

Let's digress for a moment, if only to delay talking about maggots for a few more paragraphs (they give me the creeps... more on that later, though). There are some species that seem to have been dealt a particularly poor hand where diseases are concerned. From a large animal vet's point of view, it's sheep. If you can think of something unpleasant happening to a creature, then the creature it usually happens to is a sheep.  Cheesy gland, hairy-shaker disease, staggers, struck, braxy, foot rot, mouth rot and, yes, pizzle rot. Fly strike too, of course.

For the small animal vet, it's rabbits. As a species, rabbits have survived by being really, really good at making other rabbits. They're prolific, but not, on an individual level, very hardy. I've talked about some of the problems with being a rabbit before - there's many more pitfalls, the not least of which is fly strike.

Fly strike is probably not the best name for the condition (although it's certainly catchier than the official title of myiasis ) because the flies in question are neither forming a picket-line outside the rabbit's hutch nor physically thumping the rabbit - but an afflicted (or fly-blown) animal does look rather dazed as if it's just taken a left-hook, so maybe that's where the term came from. 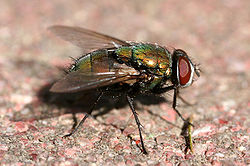 So, here's what happens... the blowfly (lucilia sericata) likes to lay her eggs on tightly compacted fur, especially moist and smelly fur. She's keen on wool (which is why sheep suffer from this as well) and especially partial to rabbit fur. The eggs go on the fur, and within a short period of time (it varies depending on the temperature, but its often less than a day) the maggots hatch out. They burrow down to the skin, and they start to do what maggots do best. They start to eat.

Now, the more medically astute amongst you may be wearing a puzzled expression at this point. 'Hang on,' you're thinking, 'that's not right! Maggots only eat dead flesh, don't they? So they're not going to eat the rabbit alive, are they?'

Well, I'm very sorry to tell you that you're wrong, because that is exactly what they are about to do. It's true that, when clinically applied in sterile conditions, maggots of this very same fly have a preference for munching on dead flesh, and they are absolutely amazing in such situations at cleaning out (or debriding) all the necrotic tissue. Unfortunately, this is not a clinical, controlled situation. It's not even slightly a sterile one. It's probably technically true that the maggots are not so much eating the live flesh as killing it using acidic enzymes and inflammation caused by burrowing, and then eating the dead stuff, but such technicalities don't make a huge amount of difference to the unfortunate rabbit.

It's a quick disease - as I say, the maggots can hatch within a day, and the damage they can do in a short space of time is staggering. Unfortunately, because all this is almost always going on at the wettest, smelliest part of the rabbit - the anus and a genitals, both of which are hidden from a glancing view - all the owner tends to notice at first is that their rabbit has gone a bit quiet. The rabbits tend not to lick and bite at their burrowing attackers, possibly because there's a local anaesthetic effect (I really hope so) but more likely because doing so could be interpreted as a sign of weakness to a predator. Consequently, by the time we as vets are presented with a case of fly strike, the damage can be absolutely horrendous.

Fortunately, I have no pictures to display of the damage - firstly. I don't tend to take photos myself because when I see it I'm generally busy with the rabbit, and secondly, I'm not about to search for images of it because I've seen more than enough for this lifetime, thanks very much. You're very welcome to yourself, of course, but if you sensibly haven't done so, then I'll briefly describe the sort of things we see.

We're frequently presented with rabbits with what I would clinically describe as a 'large skin deficit' (and non-clinically as a 'big hole') often extending from the tail up over the back, or from the genitals forwards. If the rabbit is unlucky, the lesions will be deeper, extending into the subcutaneous muscles, through the perineum and on into the abdomen.  It's not infrequent to lift up the fur on a rabbit's back to have the skin lift up right along with it, revealing a white seething mass of maggots burrowing their way forwards through the gore.

A brief digression on maggots (for those of you who are still with me!) - I try not to discriminate between species. None of us were given a choice what species we were born. Even with ticks, which seem to make most people squirm with displeasure (especially when you pop 'em out with the legs still wriggling) I try and keep in mind that it's only doing what evolution designed it to do. It's not their fault they're a tick, is it?

I'm not capable of that with maggots. There's a strange atavistic revulsion that comes over me watching those little white bodies wriggle about like stubby Lovecraftian tentacles that makes me want to be sick, run screaming and destroy the abomination all at the same time. I'm not proud of it, but I also suspect I'm not alone amongst mankind in having such feelings. I know its not the maggots' fault and that it's stupid even ascribing such things as blame to the larval stage of an insect, but watching them wriggle in a kidney dish after plucking them from the living flesh of a rabbit makes me feel the need to buy a flamethrower and get all Ripley on their asses, as well as giving me all manner of dark thoughts about the nature of the universe. As ever, Darwin said it best...


'I cannot persuade myself that a beneficent and omnipotent God would have designedly created parasitic wasps with the express intention of their feeding within the living bodies of caterpillars.'

Ahem, let's try and get back to being professional. Fly strike is an emergency - the longer you leave it, the more trouble the rabbit is in. If the damage isn't too great already, we remove all the maggots from the wound site. That means physically plucking the maggots out with forceps, haemostats, cotton buds, fingers, and whatever else works to get them off the rabbit. We assess the damage - if the wounds extend into the abdominal cavity, or (as is also sadly not infrequent) we see maggots crawling out from the anus or the genitals, then there's no hope.

If there's a chance, then we clean the wounds, we treat for shock, pain, and infection, and we keep checking for maggots until they're all gone. So long as the tracks are not too deep, even very large skin wounds can heal surprisingly well; this may be some kind of testament to the healing power of the maggot even in these awful circumstances.

Well, there, that was less fun that it sounded at the start, wasn't it? Let's not beat around the bush - fly strike is horrible. Really horrible. Even to my clinically jaded eyes, it makes me feel full of horror and sympathy for its victims (victims? There I go again, as if the maggots are the criminals; it's hard not to anthropomorphise with this one).

Time is the key with fly strike. Get to it quickly, and it's easily fixed, or it never happens at all. Leave it too long and... well, you don't want me to go into all of that again, do you? Ugh. It made me feel queasy just writing about it, and it put me off my coffee. Shall we make a deal? You don't want to read about it again, and I don't want to write about it again. I definitely don't want to see it ever again. Here's a simple way to stop any of us going through it.

If you have a rabbit, check it. Check it every day - twice a day in Spring and Summer. Those eggs hatch more quickly than you think - clients find it often unable to believe the amount of damage in such a short space of time.

There's a few fly killers and fly repellents you can buy that you sponge around the back end of your bunny to try and prevent the eggs being laid or from hatching out. I'm not here to sell you drugs, but ask your local vet about them. They help. But they're not substitutes for checking. If you see eggs (like tiny little grains of sticky rice) get them off.

Your rabbit is going to be more at risk if it's overweight, less mobile, or if it has long fur. By far and away the biggest risk is rabbits with matted poo stuck around their back end, so clean it off! There can be a lot of clinical reasons for the mucky bum rabbits (teeth problems, weight problems, back problems, diet problems), and I'm aware some of them just seem to dirty protest however hard you try to prevent them, but you really need to be cleaning them daily and checking them more often than that in the Spring and Summer.