As I'm sure you're all aware (in fact, it could hardly have escaped your notice), it's election time again. I know that you haven't been able to turn on a radio or go to a news website without reading yet more about the upcoming elections for president of the Royal College of Veterinary Surgeons. I'm personally so excited by the magnetic personalities on offer that it's got me in an uncharacteristically political mood.

So, here goes. I wondered about talking about the recent much-covered horsemeat scandal, but quite honestly I struggle to find a lot interesting to discuss about it. As a vegetarian myself, I struggle to see the ethical difference between eating a horse compared with a cow, sheep, pig or chicken (or dog or cat, come to that), and almost everyone I've asked (meat-eater or not) has pretty much the same opinion. This may be a function of the circles I move in, or it may be that the media is trying to create more of a furore about the whole thing than there actually is (heaven forbid!).

Instead, I've decided to talk about badgers. I may not be eminently qualified, being neither a large-animal practitioner, farmer or ex-lead guitarist of Queen, but I'll give it a shot. I'm aware the title of the post isn't, perhaps, the most sensitive that I've ever come up with, but when I tell you that the other post I was considering was one about dog racing called 'Fifty shades of Greyhounds' then you'll begin to understand what kind of brain I'm working with here.


Right then, let's talk about tuberculosis. The bane of romantic poets everywhere, TB is a nasty, chronic bacterial disease caused by mycobacterium, a tenacious group of bugs that are particularly hard to get rid of. I don't want to make light of the disease it causes because it is, not to put too fine a point on it, a fucker. Treatable, but only with extremely long courses of antibiotics - and there are strains of it appearing that are resistant to almost everything we can throw at them - I do, however, want to have a little chat about why there's a whole load of badgers set to be killed in this country because of it (no pun intended) (okay, a little bit intended).

Before I share my thoughts with you on exactly how I feel about that, let's look at some background information. If you already know this stuff, then feel free to skip to the end (and if you don't really care what I think about it, then you're probably best just skipping the whole rest of the post, and finding one that has more jokes in it - maybe the one about the horrible kid I had in my consult room once, that's a good one - it ends with me zapping my testicles with radiation).

Still with me? Good. TB, you see, is not just a disease that affects humans. It can affect most mammals, actually, though some seem more susceptible than others - and there are two mammals in particular that are going to concern us today. The first is the cow. Cows get TB, and this is a problem because if we drink their milk unpasteurised, or eat their meat raw, then we can get TB too. Consequently, we have control systems in place to isolate, cull and remove infected animals from the cattle population and prevent spread of the disease. I don't want to get too involved with these control measures, because they're easily found elsewhere, but the classic intradermal TB testing that make up such a large proportion of a large-animals vets time have hitherto been highly successful at dramatically dropping the incidence of TB in cattle herds. Dropping, but - crucially - not eradicating. 'Hitherto' snuck into the post a few sentences ago because, sad to say, incidence rates of TB have been on the rise in the UK since the turn of the millennium.

Why the rise? It's safe to say that no-one knows for sure - it could be a consequence of the way the TB test is carried out (for various reasons, the intradermal test is far from a simple test to either perform or to interpret), the move from many, smaller herds to fewer, larger ones, increased movement of cattle around the country, the foot and mouth crisis or, more likely, a combination of all that, as well as other things.

Speaking of other things, that brings us onto the other mammal we were going to talk about - the opposum! 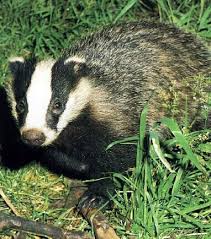 Just kidding. I meant the badger. Badgers are another mammal highly susceptible to TB (something like 17% of badgers killed by cars are found to have lesions on post-mortem) and debates have long raged about whether they are part of the problem with the current increase in TB in cows or not. Again, firm evidence is hard to come by (as with so much in the veterinary world) but the work that has been done (like this, among many others) that is there strongly suggests that badgers do, indeed, spread TB to cows.

So, here's the problem. The TB testing culling programme, effective since it was introduced in the fifties, appears to be failing. TB cases in cows are rising, and the disease is spreading. Badgers, on the best evidence we have, appear to be reservoirs for the disease - and it's very, very difficult (some might say impossible) to treat a disease in one population without doing something about the reservoir of it in another population. Like, for instance, killing them.

That's the dilemma. Nobody wants to kill badgers (except the chap in the video above) but our current strategy isn't working. Vaccinating cows against TB is illegal under EU rules. Vaccinating badgers is practically difficult, expensive, and unproven. Studies - including the best known, widest and most scientific study carried out - the report by Professor John Krebs - do show that culling badgers does lower the incidence of TB in cattle herds - albeit by a potentially disappointing 16% overall.

Those are, as Joe Friday might tell you, just the facts, ma'am - I wanted to make a clear distinction between the facts of TB and my opinion on the upcoming on-again-off-again badger cull (at the time of writing, it's on again) because, to be honest, this is not a clear-cut case, and it's helpful just to think about the background itself before you come to a decision on where you stand.

I'm sitting, actually, but from here on in things will increasingly be coloured by opinion rather than fact, so consider yourself warned. Before I tell you exactly where I'm sitting, I'd like to frame the dilemma in slightly different terms. You see, I was working for DEFRA as a Temporary Veterinary Inspector during the foot and mouth (FMD) crisis early on in the millennium. Down in Devon, as things became increasingly desperate, the pay improved considerably. FMD paid for a fair chunk of my wedding, in fact, and I didn't feel bad, because I thought we were doing the right thing. FMD was a terrible disease, and we were eradicating it from the country.

That's how I felt until I saw the piles of burning bodies, and realised that it's possible to become numb to euthanasia. I don't want to delve too deeply into that emotional quagmire right now, but I began to question just how terrible a disease FMD was to prompt such apocalyptic action. It's not transmissible to humans, and the symptoms it causes in sheep are relatively mild. Cows suffer badly with it, but - man, that's a really big pile of burning bodies. The biggest problem with FMD is how infectious it is - it spreads like the proverbial wildfire - rather than the suffering it causes to the animals. It is, primarily, an economic disease.

Let's leave the pyres behind us, for the moment, because that's a whole different debate - but it helps to demonstrate the point I'm about to make. Back to some science. TB in cattle is caused by mycobacterium bovis. It's zoonotic - that is, humans can catch it - but, despite the massive increase in TB in cows in recent years, m. bovis makes up around 0.5-1.5% of cases of TB diagnosed in this country - so, you're about a hundred times more likely to pick up TB from another human than you are from a cow.

Of these 0.5-1.5% of cases of TB, the vast majority of cases were picked up from drinking unpasteurised milk, or eating raw meat - both of which could also catch you a number of nastier and more imminently fatal diseases than TB. In fact, from 1990 up to 2005 (the time the study above was written) there was 1 case of TB that was confirmed to have been caught directly from a cow.

One case, in fifteen years. You might be thinking that one case is 'too many', but my personal opinion is that is a somewhat naive way of looking at the world. Value judgements are, and should be, made on the basis of risk, every day. The chances of any of us catching m. bovis from a cow are, by any standards, remote.

Now let's look at the proposed solution (or a part of the proposed solution - I don't think anyone is suggesting that a cull is replacement for testing and culling) - killing at least 60% of the badger population in the proposed areas (I say killing, because, to be honest, that's what is being done, and, to be honest, culling is not the most subtle euphemism for it anyway). The science suggests this could lead to a reduction in TB of around 16%. The killing would need to go on for about 3-4 years, and would have these benefits for about 6 years afterwards. Presumably, after that, you repeat the cull, though I'm not entirely clear on this point.

16% reduction for 6 years. So that, in human terms, would equate to... um... bear with me... something in the order of 0.05 less human cases of TB in that time. That's not a percentage, that's actual cases of TB prevented. To put it another way - one twentieth of a case of TB would be prevented in this way.

Don't get me wrong - TB is a terrible disease. Not least because of the enormous burdens it places on cattle farmers. The financial hardship, and the emotional strain, of having your herd yet again placed under restriction, has caused enormous unhappiness and, I suspect, its fair share of ill-health and even suicides.

We can't get complacent. We have so few cases of TB in humans because of high standards of hygiene and public health, and because of TB testing preventing infected animals getting into the food chain.

But... I keep thinking of those piles of burning bodies. If your solution to a problem is the mass killing of an indigenous species from your home, then your problem needs to be severe enough to justify such an act.

Is it? I can't believe that it is. The cull is wrong.

Email ThisBlogThis!Share to TwitterShare to FacebookShare to Pinterest
Labels: the law, veterinary