This is a writing post, not a veterinary post, so those that are turned off by such things may turn away now with a clear conscience (though now I'm a little worried I'm just left with those people who are turned on by such things. Er...hi.).

I wanted to tease you a little now that my latest project, the Express Diaries, is starting to come together. The Express Diaries is a pulpy-action/horror novel set in 1925 on (as the title suggests) the Orient Express. I'm very pleased with how it's going, and even more pleased now that Eric (Smith, Glimbit on Twitter) has agreed to do some artwork for me.

I'd like to share a few piccies with you now, partially to show you why I'm so happy Eric is working with me, and partially to be a tempting appetizer for what is to come...


As a further appetizer (though, I understand if you're a bit full after the piccies. Think of this as pudding), here's an extract from the London chapter, near the start of our story, where Professor Alfonse Moretti makes an expected and grisly discovery in the reading room of the British Museum, whilst investigating a mysterious artifact known as the Sedefkar Simulacrum...

The Express Diaries will be out later this year, in several different formats including eBook and luxury hardcover edition. Watch this space! (Well, watch the blog, anyway) 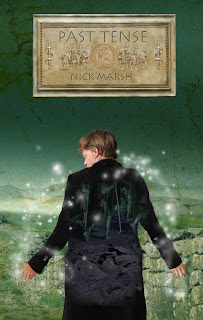 In further writing news - my novel from last year, Past Tense, is now available as an an ebook for $5 from Smashwords.com - feel free to have a peek, as you can download the first 10% for free!

Past Tense at Smashwords

[1] Attempting to follow Professor Moretti’s web of past associations and dealings is an exercise mired in misdirection, obfuscation, and more often than not, failure. It is probably better, ultimately, just not to know.
Posted by lordof1 at 15:37