This one is different. It is not a well-thought out blog post, with a coherent argument to make (so, in that respect, it's just like all my other posts). It's a lament for a friend. I'm not writing it for any reason that I need to write about it, so please indulge me, nod and smile. Feel free to back away if I get a little crazy. 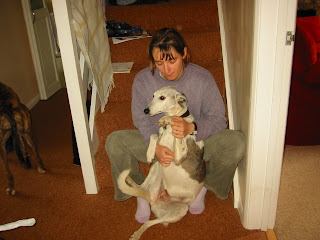 Geri died today. It's strange to write it. I've known it has been coming for so long, and I have been on the other side of the table so many, many times, that you'd think I would understand it. But I don't. The sentence at the start of this paragraph makes no sense to me. But still, Geri died today.

It seems to be a cruel trick of the human brain that, on some level, we simply don't get death. We are aware that it happens - we can even take in the knowledge that it will, sort of probably, happen to us some day. But still, we don't get it. It doesn't make any sense. That personality that was such a vivid part of our lives, that was always there - it can't just be gone, can it? I mean, sure, we know they're dead, but... y'know... where are they? It doesn't make sense.

As I write this, it's raining outside. We buried Geri in the orchard. There's a part of my brain that is screaming at me that I've left Geri outside, alone, and it's cold, and she'll be scared. It's very, very hard to silence that part of my brain. This is what I mean. We just don't seem able to process it on some fundamental level. Maybe that's what grieving is. Geri is dead.

How can death have visited our happy little family? Its got no right. Sure, I've killed hundreds, thousands of animals myself. But Geri? It doesn't make any sense.

Geri was found as a stray in Exeter in 1997, and taken to the local RSPCA kennels. Being her naturally charming self (read: tart) she was quickly rescued and rehomed to a family in Totnes. Being far, far too clever for her own good, she quickly established dominance of the household and enjoyed a rule-free life of doggy leisure and luxury matched only by the Emperor Trajan's toy poodle in the first century AD. Her debauched lifestyle led to her being speyed at her local vets a year later, after a brief but eventful dalliance with the dog that lived upstairs. Though neither of them knew it at the time, this is where Geri met one of her future owners - a fresh-faced young vet student by the name of Kerry.

Fast forward a year, and Geri's career as Imperator of Totnes was, unbeknownst to her, drawing to  a close. Her owners, growing tired of Geri's habits of rolling in badger poo, jumping up to lick small children's faces no matter how muddy her paws were, and stealing other dog's property (they had to carry money on their walks to pay anyone whose tennis balls Geri took a fancy to, because once she grabbed it she developed acute selective deafness and galloped home to add it to her growing pile) had deemed her 'unhandleable', and were looking for an unsuspecting home upon which to land this dog with ideas above her station. 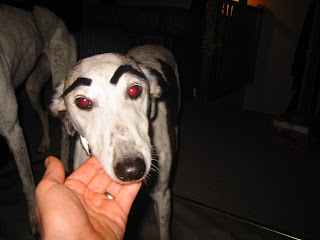 Which is where I enter the story. I graduated as a vet in 1999, and as it happened, I had just moved in to my unsuspecting practice home in Bridgwater (yes, I spelled it right; don't ask me why there's no 'e') and, having just taken on possession of the feline equivalent of Hannibal Lecter (you'll get your own blog one day, Vienna, I promise!) I had foolishly voiced the notion that I might one day 'quite like to have a dog too').

One chance encounter with Kerry and Geri's owners in Totnes later, and I soon found a brown and white lurcher being pointedly offered in my direction, complete with cow eyes, a sob story, and a heavilly edited history that skimped over Geri's more megalomaniac traits.

So, Geri moved in with me in the latter months of the second millenium (and don't go on about it not starting until 2001 - it starts whenever we said it does, okay?) and... was wonderful.

It was a shock to both of us, at first. I didn't really feel ready for a dog, and Geri certainly wasn't pleased about the hassle of having a new subject to have to break in. Unfortunately for her, I was fresh from my animal training classes, and was keen to put the theory into practice. It was a titanic battle of wits. It quickly became apparent that Geri had more wits than I did, but fortunately, I had back up - Kerry, my then girlfriend, was still having her animal training lectures. Between us, we finally managed to iron out the most anti-social of Geri's numerous traits - at least when we were watching.

Geri was also horrified that she had to share her new house with another canid - Kerry's wonderful, but not necessarily bright, greyhound, Beattie - but eventually they settled into a relationship similar to that of Pinky and the Brain. You never did manage to take over the world, Geri, but I suspect you came close - behind my back, of course.

Geri was with me for the first few years of being a vet. Those were hard years; I was depressed, disillusioned and mostly unhappy. Geri was one of the bright spots in my life during those times. It's hard for me to write more about that, today, of all days, but... she helped a lot. She was the first dog I ever owned on my own, and she's been with my my whole career.

Three years ago, we started to notice that Geri was struggling walking up hills, especially on hot days. We realised that she had developed laryngeal paralysis, and when we took her to a referral practice, our surgeon told us that it was part of a larger neuropathy that would also gradually affect her hindlimbs, called geriatric onset laryngeal paralysis polyneuropathy (GOLPP). With this in mind, we opted against surgery to open up her larnyx, because we knew there was nothing that would help her legs. We didn't think that we'd have her for very much longer. Every month seemed a bonus, but she was dextrous, and smart, and she coped with the progressive disease. It started to rob her of her continence, but Geri was always a pikey little bugger, and didn't really mind wetting her bed once in a while. We got her dog pants, banned her from the sofa, and despaired at the occasional (eventually frequent) messes on the carpet. But she was happy.

Which brings us to yesterday, when Kerry first noticed the swelling on the side of her face. By the evening, her face was twice the normal size. I rushed to the practice to get some medication, hoping that it was just a tooth root abscess, and would start to settle by today.

This morning, the swelling was on both sides. I tried to take her for a walk, and Geri - my naughty little Geri, terror of white clothes and cat food hidden 'out of dog's reach' on tables everywhere - collapsed in the field, and looked at me.

We knew. It didn't matter what the cause of the oedema was. We knew it was time. So, after a few brief teary hours at work, we came back home, to found Geri lying in the same place we'd left her. Half an hour later our poor colleagues arrived (thank you so, so much, Emma and Leanne, and we are so sorry what we put you through) to do what needed to be done. Within an hour, we were burying her in the orchard.

We were lucky, so so lucky, to have such a wonderful dog for such a long time. She helped me through a lot, and she... well, she made it easy for us, in the end. We didn't think she would, but we knew it was time. She died with three of us tickling her. Not as many as she would have liked, because there never were enough tickles in the world for her, but I hope, perhaps, enough. It's unfair of me to feel cheated by this, when so many people have endured so many worse things, so much more unfair. Geri had a full life, and she went peacefully. I should be content.

Here's a few of the things that I'll never again experience -

Her strange wookie-like howls of pleasure when she knew it was time to walk
Her complete command of my tickling arm; she got so she only had to twitch one leg and glance in my direction to receive more cuddles
Those perfect little ears, and her grunts on pleasure when I massaged them
Her bouncing through long grass like a canine space hopper
That tiny little wet nose
Her propensity for eating seatbelts - never thought I'd miss that one!
Her swimming (only when she really had to)
Her sunbathing (even to the point of asphyxiation)
Her uncanny ability to push me off the best spot for sunbathing in the garden to steal it for herself
Her rare barks
Her honing ability to find anyone out on a walk that had treats in their pockets, and her charm to always - always - get a treat for herself

I could go on. Well, maybe that should be I should go on, but I can't. I can't piece any useful thoughts together any more. I told you this was just a lament. She was a dog, but the grief feels as real to me as anything I've ever felt.

It's raining outside. Geri is dead.

It doesn't make any sense. 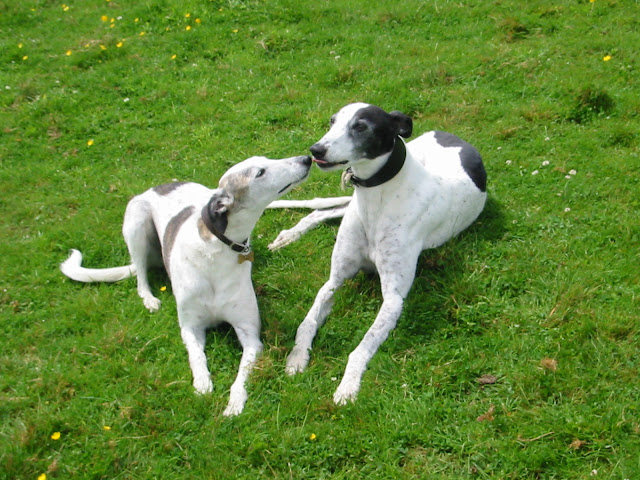 Email ThisBlogThis!Share to TwitterShare to FacebookShare to Pinterest
Labels: sad