I'll be the first to admit, that isn't the most subtle, clever, or punny of my blog titles. It's my way of flagging up that this post is largely one big (well, medium-sized) advert for my new book, The Ancients, which I am now going to attempt to sell to you - and if that makes you angry, feel free to screw this blog up, eat it, or flush it down the toilet.

(I should point out that this really only applies if you've printed the blog out, and are currently reading it on paper, because doing any of the above to you laptop/desktop/tablet/smartphone would likely invalidate your warranty, not to mention possibly cause internal bleeding)

And, if you have printed this blog out, then, like, what gives? Get with the program, daddy-o! All the cool stuff nowadays is made of electric - it's like all our dreams from the eighties have come true! Music, games, books - all of them are now essentially made of nothing! It's only a matter of time before E-food catches on. The point is - E-books are where it's at, man. Innit.

Which brings me to (I'd started to forget the point of this blog entry) my new book - The Ancients, now available as an eBook at the Amazon Kindle store.

The Ancients is a rollocking (that's a great word, isn't it? It's like swearing only without actually swearing! I'm going to say it again. Rollocking. Heehee.)

(Oh. I've just looked up rollocking in the online dictionary, and it turns out it doesn't mean quite what I thought it meant. Sigh. Okay, let's try again.)

The Ancients is a rip-roaring (better?) fantasy tale of betrayal, mystery, romance, war, kings and assassins. It starts with a young, embittered knight returning from a civil war that his ripped his country asunder. Here's a little excerpt to wet your collective whistles... 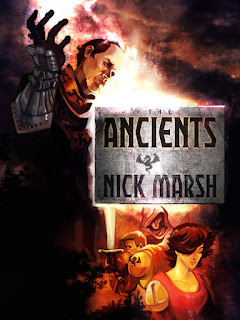 As he turned his face back to the road something in the darkness caught
his eye; a patch of light amidst the unrelenting black, lying by the side of the
road. It was impossible to make out any detail. He nearly ignored it. The last
thing he wanted was another delay, to have to spend all night in this accursed
weather, but something made him stop and look again. A smear of white, fuzzy
in the rain. Something was familiar about the shape. He approached it and as
he did so felt a peculiar feeling of having done this before - walking towards a
lonely shape in the rain. He tensed with expectation and dread, although he
didn’t know why. A brief image of the elven child flashed into his mind. Dazlar
ignored it, as he had learned to over the last few months, and reached the
shape, which finally became visible through the onslaught of water. He sighed.
So close to his home, must he be plagued here as well?

A body lay face down in the mud just off the road - a pathetic, crumpled
figure wearing scraps of soaked peasant clothing, silent and unmoving. Dazlar
rushed forwards and turned the body over, feeling the chill of the skin and
knowing even before he pressed his fingers into the neck that he would find no
lifebeat. He was right.
The corpse was that of a young woman with short, mousy brown hair
and a thin, pinched face. Dazlar suspected the girl had been starving for a time
before she came to this sad end. Her limbs had not stiffened yet but the skin
was cold. She couldn’t have been dead long. He sighed again and rubbed his
eyes with the back of his hand. He had seen so much death in the years he had
been away, but to find it now, almost on his doorstep, made the homecoming
even worse than the rain and wind had done. He looked down at the girl again,
searching for any sign of injury, any clue as to why she lay here. He could see
no blood around, no obvious wounds on her. It seemed as if she had collapsed
as she walked - or more likely thrown from her mount, the way she way been
lying when Dazlar had found her. She was not dressed for riding, though,
horse or drake. What to do now? Dazlar couldn't simply leave her here, not like
this. Burying her was not a prospect that he wanted to think about with the
weather the way it was. He really didn't have much choice, so close to Oldmeet.
He knelt down beside the body and with a grunt of effort hoisted her onto his
shoulders. The body was surprisingly light, despite the rain-sodden clothes.
Wondering if his homecoming could possibly get any worse, Dazlar stepped

back onto the road, such that it was, and continued towards the village he
hadn’t seen for three years.

A few miles down the road, Dazlar is picked up by a smelly, unpleasant farmer, Glanvic. After the sort of stilted conversation that normally occurs at parties where everyone is sober, Glanvic makes a surprising discovery...

The two sat silent for a time as the big shire pulled the wagon on
through the night. Then the small man broke the silence.
‘I'm Glanvic, by the way. Glanvic ap Glanver. I'd shake yer hand but...’
he grinned and wiggled his body to indicate he needed both his hands on the
reins.
‘Pleased to meet you.’ Dazlar said, not entirely truthfully. ‘So, how do
you come to be out on a night like this?’
‘Hah!’ said Glanvic, ‘Wouldn't believe it! I've 'ad worse bloody luck
tonight than the sodding Orc Empire, I ‘ave.’ He flashed his brown teeth at
Dazlar again. ‘I'm on my way into Oldmeet for the market tomorrow.’
‘Ah, yes,’ Dazlar said. Of course, there was always the market. It seemed
strange, but reassuring. The country was in chaos, ripped apart by civil war,
but they still held the weekly market in Oldmeet. Dazlar had been half
expecting everything to have changed. Perhaps it was because the homecoming
was turning out so differently than he had imagined. He took it as a good omen
that some things were still the same as they had always been.
‘Yeah,’ said Glanvic. ‘I'm a pig farmer, see.’ Dazlar nodded. He had
guessed as much from the smell. ‘Farm's a few miles from 'ere. Normally only
takes an hour or so to get in, only this bugger 'ere,’ he gestured one arm to the
shire driving the wagon, ‘only goes and throws a bloody shoe a mile into the
trip!’ He paused for the drama of this to sink in.
‘Oh dear,’ Dazlar said politely.
‘Oh bloody dear is right, my son!’ said Glanvic. Dazlar was hit with a
waft of Glanvic's breath, which was even worse than his general body odour.
He leaned back a little. ‘A bloody hour it took me to sort that out, and if that
wasn't enough a mile after that the wagon only bloody...’
Dazlar never found out what had happened next on Glanvic's ill-fated
journey. The pig farmer had stopped mid-flow and turned to look at the back of
the wagon. Dazlar had turned too. A loud spluttering noise was coming from
the covered section. Glanvic narrowed his eyes and brought the wagon to a
halt. He turned and his front half disappeared through the covered flap. When
he emerged he stared suspiciously at Dazlar.
‘I thought you said that girl was dead!’ Glanvic said, the tone of his voice
changed, accusing. ‘She's breathing!’

Ooh! Mysterious! What could possibly happen next?

All this and more can be yours for less than the price of a Starbucks Coffee! (probably...I haven't actually checked the coffee prices. Must be cheaper than of those frozen ones with raspberry juice poured on them, anyway - you need a mortgage to get one of those babies.)

The first few chapters can be read online at amazon, so why not hightail it to your local ebook store, if for no other reason than to check out the lovely cover designed by Eric Smith.

Amazon US version here - The Ancients at Amazon.com

Thank you for listening! Normal blog service now resumed.
Posted by lordof1 at 12:00